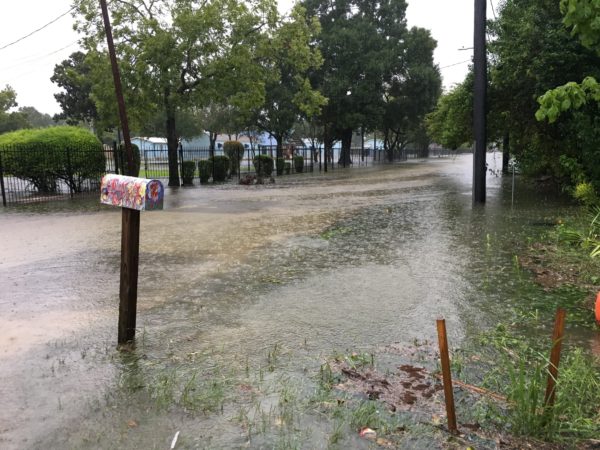 We on the coast are still in a state of shock since Hurricane Harvey blew through southeast Texas. Amid the unfolding disaster, it took almost no time for people to speculate and point fingers about the reasons why of course Houston flooded and how this disaster could have been prevented. There are two points of discussion that have really hit a nerve for me: the decision for Mayor Turner to not issue an evacuation notice, and the idea that Houston residents (those freedom loving Texans) should have seen this coming due to their irresponsible over-development and laissez-faire zoning laws. What people seem to miss in both of these incessant discussions is that the answers lie beyond the disaster — they cut right to the core of why (still) so many people want to settle in this country.

One of the quintessential symbols of the American Dream is owning a home. As one of the largest and most diverse cities in the U.S., Houston citizens embody the grit that it takes to keep the American dream alive, despite living in a soggy, humid swamp. So in the face of doom or disaster, the question of whether to stay or go or to build or not to build are not that simple.

In the August 29th edition of the New York Times’ podcast The Daily, Michael Barbaro speaks with Cinco Ranch resident Jacqueline Herrera. The podcast starts off with a voicemail where Herrera describes her situation at home as the flood waters are nearing: “…we have been inside our home for the last 72 hours. The water is approximately 30 inches deep in the street out front and about four feet from our front door at this time. And, as of this message at 4:26 p.m.… we have not evacuated.” When Barbaro checks in with her a couple of hours later, she still hasn’t made a decision. “It’s incredibly difficult… as the water gets closer and closer to the front door you would think it would get easier, but it’s not.”

As she describes the flooded scene all around her, seeing all of her neighbors slowly evacuate, she’s still grappling with what to do. Barbaro tells her that he Googled the Cinco Ranch community and says that by all accounts it seems idyllic — new homes and beautiful waterways — and asks if she is living in her dream home and whether that has anything to do with why this decision is so hard to make. “Yes. I mean, I’m 40 years old and this is the most amazing place I’ve ever lived in my whole life.” While still on the phone, you hear a rescue team shout to her if she needs any help, to which she replies: “We’re good — we’re hanging out for now.” Then, “Sir, when we decide we are not good — who do we call?” Herrera had already made up her mind: “…maybe we’re stupid, I don’t know. But it’s hard to leave your entire life behind and not know what’s going to happen overnight.”

I’m an artist and homeowner, and I know other artists who are homeowners in Houston. It’s surprising, because we’re the fourth largest city in the United States, and if you consider the costs in the real-estate market in other comparable cities, and add in the mounting student debt that a liberal-arts education leaves you with, and the fact that the cost of living is outstripping the rise in incomes, homeownership seems like a long shot for me and my peers.

I was fortunate enough to join the ranks of artist homeowners at the end of last year. Like the pioneers in the old west, my soon-to-be husband and I found some land, planted a flag, and set about to build the house ourselves, within the city limits. This all started post-2008 crash, and post-2013, which was Houston’s crazy real estate boom, and it was hard to get a loan and figure out how to actually make this dream a reality.

But once the process started, I would estimate that 30% of our construction was focused on drainage, water retention, flood maps, percentage of impervious cover, etc. Since we’re in a flood plain, we had to build our finished floor at 79 feet above sea level. We ended up going a couple of feet above that to 81.3 feet . Our decision to do piers instead of a slab was dictated by water mitigation rules which would have required us to add a retention pond the same size as our footprint. Plus piers don’t impede the flow of water. We had to insert a 4×4 foot catch basin underground at the front of our property to hold rain-water run-off from our drainage ditch, in case the street-side ditches are filled. The land had to be sculpted, to take water away from our house and into this drainage mote surrounding us. 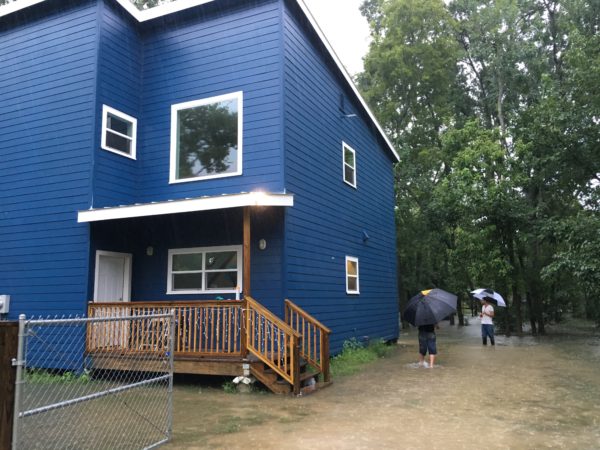 I sympathize with Jacqueline Herrera. Even as the rain started to pound Houston and the water slowly rose all around my house, I knew I wouldn’t leave it. (In my manic state, I had the brilliant idea that we’d just use a wet vac when the water came inside, but of course where do you empty it when water is all around you?)

But you know what? All those City rules, codes, maps, and worksheets worked. We made it through Hurricane Harvey, and our house didn’t flood. We went above and beyond many of the requirements, but the process made us acutely aware of the risks that came with our land, and the advantages even small changes could effect in the face of a hurricane. Granted, I live in Acres Homes, an area that still has a lot of land and trees to soak up the water. I’m not adjacent to big stripmalls with oversized parking lots that redirect water toward surrounding homes. I’m not near a highrise with an underground parking garage that is displacing I don’t know how many millions of cubic feet of water. I also don’t have a nice concrete driveway leading up to the house — instead the water can be reabsorbed into the soil through crushed concrete.

Houston has come a long way in its own understanding of how to withstand water, and how to reduce the concrete and carbon footprint that makes flooding worse. The City even required us, and all other builders of new residential houses, to add a conduit running from our attic down to our electrical panel for an easy solar-power installation. The rules and regulations are in place. The water, and the flooding, is inevitable in Houston, and we have to build accordingly if we don’t want to ruin the last major U.S. city where you can still afford to be both an artist and a homeowner.